Why do root canals take 2 visits? 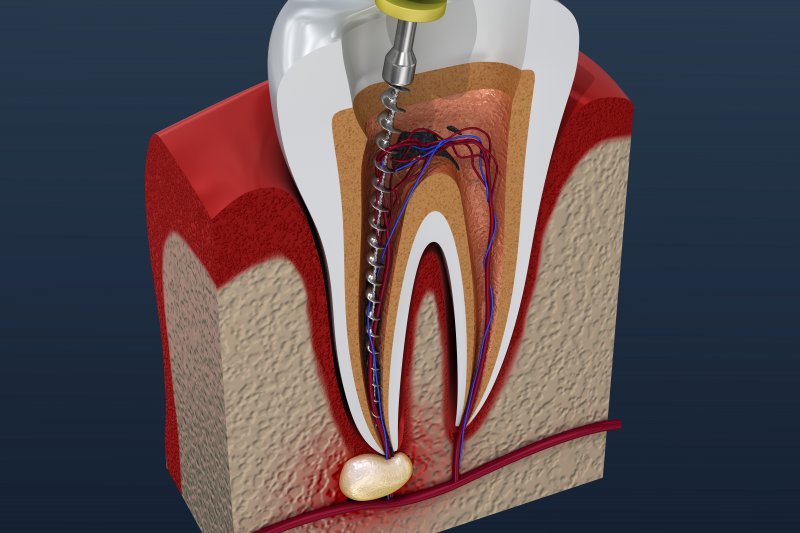 Getting a root canal is never on the top of anyone’s priority list. Just the name itself makes most patients cringe. Although the dogma of root canals has not been a positive one, modern advances in dentistry have made the procedure a lot more predictable than in years past. Sometimes, a tooth that needs a root canal requires two visits to complete. Most patients end up asking why the procedure could not be completed in a single appointment. We will tackle this topic along with other lingering questions that you may have in this article

What is a root canal?

A root canal is normally required when a dental cavity has penetrated through the tooth structure, and into the nerve chamber of the tooth itself. When this happens, the nerve tissue begins to get infected, and a root canal is needed to remove this infected tissue. Once the infected tissue has been identified, a series of files and instruments are used to clean out the inside structure of the tooth. Medications are also injected within the tooth itself to clear any remnants of bacteria left within the canals of the treated tooth. After the tooth has been thoroughly cleansed and cleaned, a material called gutta percha is used to re-fill the canals. Once the canal(s) are filled, the tooth is built up and a crown is placed on top of the tooth itself to prevent it from fracturing in the future. There are some instances where a root canal cannot be finished in a single appointment. We will discuss why this is in the following section. 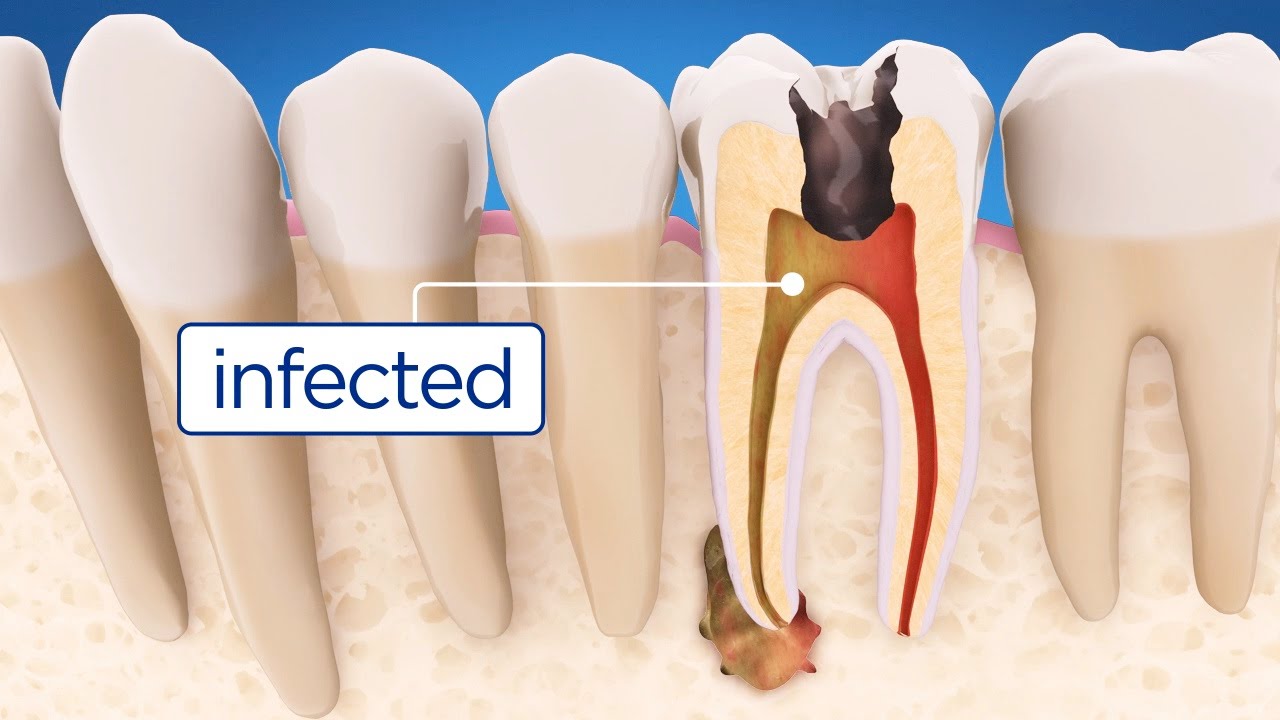 Why do some root canals take two appointments to complete?

Many patients who require a root canal end up having teeth that are infected. Some infected teeth, unfortunately, cannot be cleaned completely in a single appointment. In these cases, what your dentist will do is clean the canals of the teeth as best as he or she can, and place medications inside the tooth structure itself. Then the dentist will place you on a course of antibiotics that will help clear out the rest of the bacteria within the tooth itself. Once your antibiotics are completed, you will return to your dentist for a second visit so that they can complete the root canal treatment in its entirety.

What happens during a second root canal appointment?

There are a series of steps that occur during your second root canal appointment:

Is the second visit for a root canal painful?

Not at all. During this visit, you have just completed a course of antibiotics, and your dentist has removed most of the infection within the tooth structure. This visit is normally a lot easier to complete in comparison to the first stage of the root canal treatment that you have already gone through. Another reason why it’s less painful is that the nerve tissues were already removed during the first visit. This makes numbing the tooth a lot easier the second time around. 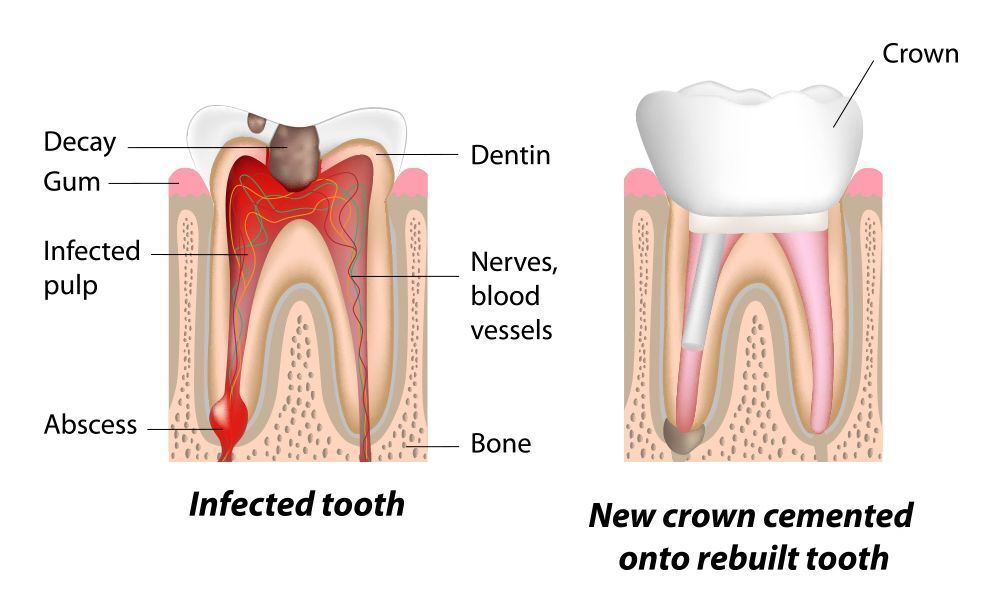 Is a crown necessary after a root canal?

A crown is absolutely recommended after a root canal to prevent the tooth from fracturing and breaking down in the future. Our team at Best Dental strongly recommend a dental crown after your root canal is completed. We have had so many patients with previous root canals that have broken their tooth. Some of these cases end up leading to a dental extraction because the fracture has made the tooth non-restorable.

Do I need to have antibiotics after my root canal?

Antibiotics are highly recommended, either after your first root canal visit, or after the root canal is completed. These medications help eliminate any nidus of bacteria that is left over from the procedure. Although there have been conflicting studies performed on this topic, our team almost always prescribes these medications after a root canal has been completed. Not taking a course of antibiotics may end up leading to a re-infected tooth.

We hope this article broke down the reasons why some teeth require two appointments in order for the root canal to be completed. See your dental healthcare professional to see if he or she requires this for your particular situation. If you have any further questions, contact our team today. We hope to hear from you soon.

Kyle is absolutely amazing . Doctor Naderi and Dr Jasmine are an amazing powerhouse. Would not trust my mouth with anyone else . Thank you for changing my life .

One of the best service I have had in quite some time, caring and friendly staff, clean premises, convenient location.

I highly recommend Best Dental in Richmond. My husband and I had a wonderful experience with Kyle the dental hygienist and the Dentists are extremely helpful, kind and knowledgeable. Great... read more relaxing music, clean environment and bathrooms.

03.30.22-First impression started with a phone call when Perla assisted me with all the questions I had, from procedure, after care and financial. when I walked in the first thing... read more I notice was the office was so clean and decorated. The front staff and Perla were super attentive, as soon as I walked in they made sure I was comfortable and made sure I didn’t feel nervous. As I made my way to the back and into the exam room the back area was just as clean. All the Staff were super nice and friendly. The dentist came in and was super friendly, polite manners. We spoke about addressing my problem and we set a date. Extraction Day: 03.31.22 The Doctor was amazing and kept me calm and made sure I understood everything that was going to happen. Wisdom tooth out! Best part….prices were low compared to other office! I'll definitely be back and recommend others. Excellent job! I have found my dentist home and I could not be more happy.

theyre professional, clean, timely and very friendly! reasonable prices and welcoming. i got my implant done here and their prices are so reasonable & theyre so quick and precise! i... read more even brought my daughter for her check up & cleaning. theyre amazing here! Dr. Naderi is amazing!!!

The staff was extra friendly, the facility is clean, the dentist is great with her patients and is very willing to take the time needed to listen to my concerns... read more and educate me along the way. I highly recommend this dentist office.